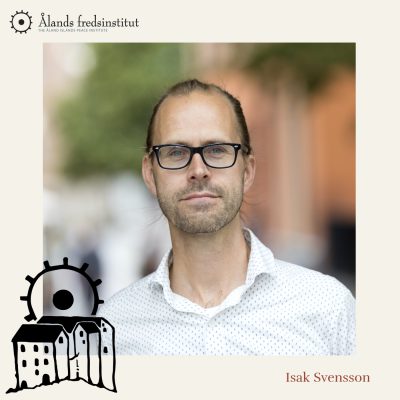 Isak Svensson, Professor at the Department of Peace and Conflict Research, discusses this year’s theme “Making Peace – Meetings, Mediators and Peace” with Kjell-Åke Nordqvist. This is the third episode in the podcast-series leading up to the 2021 Kastelholmtalks on Peace.

One main issue that Svensson points out in the discussions is that since conflicts are changing, we also need to change the way that mediation is done.

The initial discussions focused on the mediator and his or her role in conflict solutions and mediation situations. Svensson puts emphasis on mediation being one of the most important components in conflict solution. Some interesting developments when it comes to mediation were brought up when Nordqvist and Svensson was discussing the term ‘mediation’.

Mediation hava during a long period of time been a function that occurs in situations where it is needed, but lately there has been a development where some institutions builds support systems and educates and specializes on mediation. While one would perhaps think that this would mean that the number of mediated conflicts would increase, this is not the case and Svensson says that they have actually decreased and that you can see a change in the gap between our capacity to mediate and what situations we actually mediate. Svensson thinks that this change might, to some extent, depend on the improvements in conflict-prevention, but also due to some forms of mediations being hidden and not visible in statistics.

When asked by Nordqvist, Svensson says that he thinks that all type of conflicts are, in specific moments, mediable. The “mature moment” (Swedish: Det mogna ögonblicket) is seen as a certain moment in the process of the conflict where both parts are open to try solving the conflict in a peaceful way. Even if the conflict in question is not in the mature moment then one should not leave it be, according to Svensson, but instead make efforts for the right conditions for the mature moment. When it comes to which type of mediator that is the most successful, Svensson says that the different mediators are suitable for different type of conflicts and situations. The discussions then bring up the Nordic countries (with a focus on Sweden, Finland and Norway) and their way of mediation. Svensson claims that there is no “Nordic profile” when it comes to mediation and that the ways of mediating can differ even domestically, but that there is a consensus of a will to assist and help amongst the Nordic countries. Although something that does stand out a bit in the statistics when it comes to the Nordic countries, is that they in general tend to have more women that are mediators, compared to other countries.

The discussions then move on to a theme that Svensson have personally done research in, which is the role of the religion in conflicts and jihadist-conflicts specifically. Svensson brings up that conflicts where radical Islamistic movements are involved are also more difficult to solve, which is to some extent due to the difficulty in making both parts meet for negotiations. Svensson also points out that researchers have not reached any consensus on what the reason for these types of conflicts being so difficult to solve. One aspect in these types of jihadist-conflicts is that they are, often entangled in each other and over state boarders. The perhaps best solution in cases like these which are very difficult to solve, is to try to pave the path to go back to the original reason of the conflict which is often simpler and more practical to approach. When having arrived back to the original reason for the conflict, it is easier to have a dialogue and try to reach a constructive solution to the issue. The podcast-episode ended with a discussion about how the best conditions for mediation is a combination of the right timing and place in the process of the conflict as well as education on mediation and that both of these are needed in different situations.