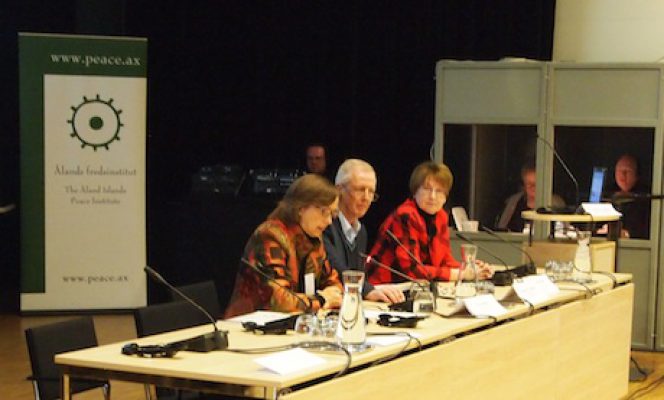 Conference on Nordic autonomies in a Peace Persepective 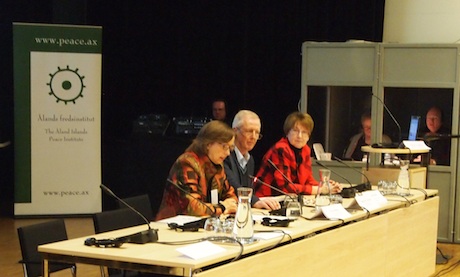 The Nordic Council’s Citizen’s and Consumer Committee, with Annicka Engblom and Satu Haapanen in the lead, has together with the Åland Islands Peace Institute and its Director Sia Spiliopoulou Åkermark been driving forces to bring about the conference and research project on the theme of the Nordic autonomies and peace. Gunilla Herolf, a member of the Åland Islands Peace Institute Research Board, introduced the audience to the research within the project.

One of the goals of the project is to shed light on the autonomies from a peace perspective, given that Norden and the Nordic countries often have regarded their autonomies as peripheral exceptions and sometimes even as problems. Relations between what can be described as “the centre and the peripheries” are not always unproblematic. The project aims to highlight an alternative perspective, and to examine whether autonomies can be regarded as a resource for the peaceful development of society and as relationships that are continuously developing. Furthermore, it aims to discuss if and how the experiences of the Nordic countries may be of interest in international conflicts and peace processes.

The core issue for the conference was formulated as “Can the Nordic autonomies be regarded as peace processes?”

In advance of the conference, a team of researchers have undertaken case studies and comparative studies of the Åland Islands, Greenland and the Faroe Islands in their respective areas of expertise – security, law, political science and economics. They also discuss the position of the autonomies in relation to the development in the Nordic region as a whole, as well as their relevance for peaceful societal development in other parts of the world. At the conference, three researchers presented their draft articles. Gunilla Herolf emphasized the importance of security politics for the three Nordic autonomies. Ágúst Þór Árnason, Professor of Law at the University of Akureyri, analyzed Greenland, with a focus on colonial structures. Tove Malloy, Director of the European Center for Minority Issues, presented her article,”Denmark’s role in the emancipation of Greenland: Guardian or peace actor?”, in which she makes both an historical as well as a topical analysis.

In a panel discussion on “The development of the Nordic autonomies – what lessons can be learned and what aspects can be used constructively?” politicians from the Åland Islands, the Faroe Islands and Greenland discussed self-government in relation to the central power and also to each other, under the lead of the moderator Sharon Jåma Hofvander.

Johan Lund Olsen, a member of the Danish Parliament for Greenland, was inspired by demilitarization, a regime he would like to see also in the Arctic. Sjúrður Skaale, member of the Danish Parliament for the Faroe Islands, analyzed the self-government of the Faroe Islands as a balancing act between independence and community, which do not automatically exclude each other, and also pointed out that Denmark should not be seen as a unitary state. Elisabeth Nauclér, the member of the Parliament of Finland for Åland, highlighted the importance of the Nordic cooperation as a partnership where small actors have the most to gain. Nauclér also compared the formal structures in between the autonomies, where the structures in the Åland-Finland case can be described as bureaucratic, almost “Czarist” while the Faroe-Denmark relationship might be seen as more pragmatic and informal.

Hans Wallmark, member of the Swedish Parliament and the Nordic Council contrasted the Nordic autonomies to international conflicts and concluded that there are good reasons to highlight the Nordic solutions in international contexts. He also claimed that these solutions are part of a Nordic brand. Wallmark further noted that this conference would be unthinkable in many situations in other parts of the world. In the Nordic countries the topic in question can be discussed in a rather relaxed manner.

The second politicians’ panel had been mandated to discuss political visions for self-government in the Nordic countries in the year 2020, which the participants and the moderator Niklas Lampi, editor of the newspaper Åland, concluded is a rather short-term perspective. Christian Beijar, Chairman of Åland’s delegation to the Nordic Council, noted that the Committee for the Development of Autonomy under the leadership of President Tarja Halonen was just about to present its proposal for a new Autonomy Act and that this will have a major impact on how the work will continue on the overall objective to develop the Åland autonomy.

Helgi Abrahamsen, chairman of the Faroe Islands delegation to the Nordic Council, compared self-government to a marriage, something that two parties should have entered of free will, and requiring reciprocity, respect and equality for the marriage to work to the benefit of both. Abrahamsen said that in the Faroe Islands there is considerable disagreement about how to proceed. It is usually claimed that half the population would prefer to remain in Denmark while the other half wants to break free. However, according to Abrahamsson is it more reasonable to say that 25 percent want to succeed, 25 percent want to stay while 50 percent do not hold a definite opinion. Thus, it is also unlikely that there will be major changes in the near future.

Russia was a theme also taken up by senior researcher Pertti Joenniemi in his expert presentation entitled “Why and how is the Nordic experience relevant to international peace processes? – The external perspective”. Pertti Joenniemi highlighted the importance of “ontological security”, thus being able to feel safe and secure rather than building a world view and relationships to the outside world based on images of fear and threats.

Many of the perspectives highlighted supports the view that the Nordic self-governments can be regarded as peace projects. Conflicts and tensions exist, but they are handled in a peaceful manner, which was contrasted against how minority and majority problem is handled in many other parts of the world. The Nordic autonomies were also described as part of the Nordic self-image and as part of a Nordic “brand”. Several speakers promoted the possibility of using the experiences of the Nordic autonomies as inspiration in international conflict resolution, but several also pointed to the importance of looking inward and continue to work to peacefully manage challenges, both internally and in external relationships.

The conference was a part of a research project with the same name, and was not expected to give any definitive answers. Rather, the organizers hoped that the conference would bring new perspectives and raise new questions. The project manager and researcher Sarah Stephan from the Peace Institute said after the conference that she had gained many insights and that new questions arose during the afternoon. The Peace Institute and the Nordic Council’s Citizens’ and Consumers Committee is now working to gather research texts and abstracts from the conference for a publication that will be completed during spring.

NB In the Swedish language version of this article you can listen to sound files from the conference, in Scandinavian languages.