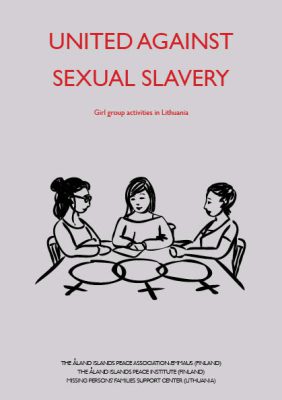 According to the 2006 United Nations Office on Drugs and Crime (UNODC) report, about four million people around the world fall victim to trafficking every year, of which around 80 % involves trading in persons for the purpose of sexual exploitation. The overwhelming majority of them are women and children. Different international organisations warn for an increase of human trafficking in connection with the global financial crisis.
Finland signed the Council of Europe Convention on Action against Trafficking in Human Beings on 29 August 2006. The purpose of the Convention is to prevent and combat trafficking in human beings, also taking gender equality aspects into consideration. The Parties are obligated to take different steps to intensify the prevention and combatting of human trafficking. For example, they must arrange awareness-raising and education campaigns as well as research and information. Furthermore, the Parties commit themselves to various measures to discourage the demand for services of victims of trafficking. The Convention also encourages cooperation with civil society.

The Åland Islands Peace Institute has been involved in trafficking prevention activities mainly in Lithuania, Belarus and the Kaliningrad region. Cooperation with the partners in Latvia was initiated in 2009. The Nordic girl group and boy group method has been used as the main tool for preventing trafficking and promoting gender equality in the countries involved. 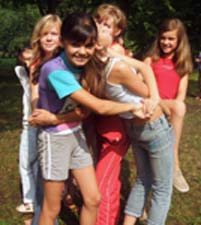 The girl group method has been developed in the Nordic countries, mainly in Sweden, Finland and the Åland Islands. A girl group consists of six to eight teenage girls, who gather on a regular basis under the guidance of one or two female leaders. The group usually includes teenage girls within a certain age group. The small size of the group fosters a sense of security. The main emphasis lies on discussion, which focuses on seeing society from a gender perspective and aims at highlighting structural injustices that women have to face on a daily bases due to their gender. Discussion topics and other activities are proposed by the girls themselves. In a girl group, girls are given the opportunity to come together on their own terms, without boys. This provides the girls with sufficient space to display their real selves and to feel respected and accepted for who they are. The girl group activities are also meant to assist girls in developing their own set of values and in confronting the influence of other youngsters in socially vulnerable situations. The girl group method has so far been introduced in Lithuania, Belarus and the Kaliningrad region where it is used for prevention of trafficking and other social risks. In 2010 the method will be introduced in Latvia.

Read more about the method here.

Boy group activities are organized in the same way as girl group activities with a strong focus on gender equality and on the building up of an understanding of gender development in society. The boy group functions as a place where the masculine norms and society’s masculine ideal is problematized and questioned. During the boy group meetings teenage guys have the possibility of discussing such topics as gender equality and power as well as their own behavioural patterns and attitudes towards women. In 2009 the boy group activities were launched in Lithuania, the Kaliningrad region and Belarus.

Trainings for girl group leaders in the neighbouring countries

The first training for girl group leaders was organised in Lithuania in November 2003 on the initiative of the Åland Islands Peace Institute. Since 2004 the trainings are arranged in cooperation with the Missing Persons’ Families Support Center (Vilnius, Lithuania) in the frame of the project “Girl Power in Lithuania”. The main goal of the project is to promote gender equality and to prevent Lithuanian girls from falling victims to sexual slavery. The project has so far resulted in 40 groups, which involve more than 300 girls from a vulnerable background. In 2007 a group of 11 Lithuanian leaders received the qualification of a trainer and have since then been holding trainings for other girl group leaders both in Lithuania and the neighbouring countries (Belarus and the Kaliningrad region).

You can find reports from the latest trainings here.

In October 2009 the Åland Islands Peace Institute started an INTERREG IV A project entitled “Challenging Gender Stereotypes for Prevention of Trafficking. The project will be implemented in close partnership with Riga-based Resource Center for Women “Marta”, to work on implementing the unique Nordic Girl and Boy Group method in both countries, informing the wider audience about the importance of making the links between empowerment, gender equality and gender-based crime, as well as scientifically researching the outcome. Read more

Positive findings on the efficiency of the girl group method

Jone Sestakauskaite, student at the programme for European Studies at Malmö University, has written her Bachelor’s Thesis on the effectiveness of the girl group method in terms of promoting gender equality and combating trafficking in human beings. She has studied the girl group activities at the Center for Women and Children Nendre in Lithuania and come to conclusion that the girl group method is a successful strategy leading to fewer girls being lured into trafficking. Another important finding was that the group meetings serve as an alternative educational environment increasing awareness of the underlying causes of trafficking. The author has also provided recommendations for the improvement of girl group work in the future.

A short summary of the findings of the thesis can be downloaded here.

PrevPreviousMedia and Democratic Participation, February 2008, Åland
NextLove does not start with fightingNext