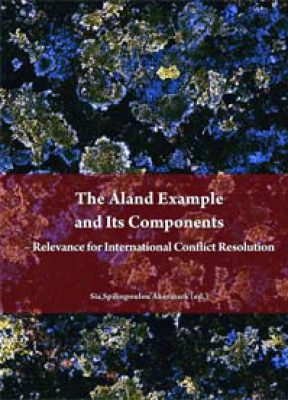 New publication about the Åland Example 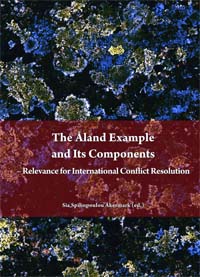 The Åland Islands Peace Institute’s latest publication, an edited volume entitled “The Åland Example and Its Components – Relevance for International Conflict Resolution”, was launched on 1 November 2011 in the framework of an international conference that attracted more than 100 participants, among them prominent diplomats, politicians and scholars. (Read more about the conference here.)

The publication presents the conclusions from a research project that has ben conducted during 2010 and 2011. The original research project followed two strands; continuity and change as characteristics of the Åland Regime on the one hand, and the Åland Example as a tool in international conflict resolution on the other. Sia Spilopoulou Åkermark, Sarah Stephan and Heidi Öst have outlined features of both continuity and change in what can be classified as the three components of the Åland Example: the autonomy regime and its institutional design, the demilitarisation and neutralization, and the cultural and linguistic safeguards of the minority protection regime.

While conflict resolution literature covers a wide area of subjects, there has been limited attention paid to the role of territorial autonomy as a possible conflict resolution tool. Moving beyond the formal aspects of the division of competences between center and periphery, the present book achieves a dual goal. It develops an analytical tool for understanding the durability and robustness of evolving autonomy arrangements.

Further it documents and analyses how the Åland Example and its three major components (autonomy, demilitarization and language and culture safeguards) have been used in specific disputes and conflict situations, including in the Caucasus, in Kashmir, in Japan, in East Timor, Tibet and the Israel-Palestine conflict. The book represents a unique combination of theoretical
insights with the experiences of well-known diplomats and politicians.

The volume further features contributions by Professor Emeritus Yash Ghai, who has provided a comparative perspective, Professor Kjell-Åke Nordquist, who has written on the use of the Åland Example in connection with the negotiations on the international status of East Timor in the end of the 1990s”, Dr. Fuijo Ohnishi, who contributed with an analysis on the Japanese perspectives on the Åland Example and by Member of Parliament Elisabeth Nauclér who has written on her experience in the application of the Åland Example, among others on the Balkans.

Spiliopoulou Åkermark, Stephan and Öst had the opportunity to interview prominent diplomats, politicians and scholars, namely Heikki Talvitie, Jan Eliasson, Pär Stenbäck, Terhi Hakala, Thorvald Stoltenberg and Sten Widmalm, on the use of the Åland example in relation to the conflicts in Nagorno-Karabakh, Abkhazia and South Ossetia, Kashmir, South Sudan and Israel-Palestine.

The research and publication of the above mentioned volume was made possible by financial contributions from the Finnish Ministry for Foreign Affairs, the Jubilee Fund of the Åland Parliament and the Åland Government.

A flyer with more information can be downloaded here (pdf).