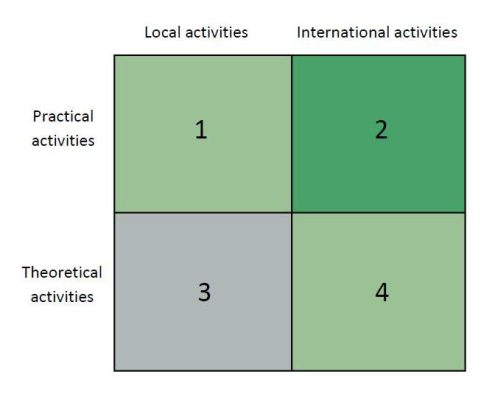 Approved by the Board of Directors on 16 January 2010

The three subject areas of the research

The results of the research

The direction of the research programme in coming years

The Åland Islands Peace Institute was founded in 1992 as a politically and religiously independent foundation. The purpose of the foundation is to promote and support both practical activities and research concerning peace and conflict issues in a broadly defined sense, from the vantage point of Åland and its special status. The Åland Islands Peace Institute is included in several networks of organisations and institutions that work with related issues. The institute has consultative status with the UN Economic and Social Council, ECOSOC.

The activities of the Åland Islands Peace Institute are directed at a broad target group, both on Åland, in Finland and the Nordic Region, and internationally. The research and investigations concern the conditions on Åland as well as Nordic and international questions. The Åland Islands Peace Institute aims to promote the international contacts of Ålanders and knowledge of international and European law, international relations, and human security. The institute also aims to contribute with the development of knowledge, analysis and discussion of Ålandic society. The peace institute provides for the need for deeper discussion and research, for instance on self-governed regions, minorities, security and questions concerning the Baltic Sea region and European development, in other words subjects that are of great importance for Åland and the neighbouring region.

For the international target group the Åland Islands Peace Institute strives to meet the need for knowledge and information, as well as analysis, of the status of Åland and the ‘Åland example’ as a point of reference and inspiration in conflicts and mediation efforts, in particular in relation to questions of minorities and forms of self-governance. The expertise within this area is used for consultation, dissemination of information, and other participation in international conflict management. Here there is also a connection between theoretical and practical activities.

The peace institute’s research is pursued with a strong awareness of the following three fundamental perspectives:

–       The research, like the peace institute’s activities as a whole, will contribute to solving and preventing conflicts;

–       Åland, the Nordic region and the Baltic Sea region constitute given and central points of departure for both the research and for the other activities of the institute. However, the research can also draw on examples from other regions of the world, in particular in respect to the relevance of the ‘Åland example’;

–       The research, like the practical activities, takes place with conscious reflection on the significance of gender within each of the three subject areas (security, autonomy, minorities) and of the importance of strengthening the position of women.

The target group and the activities of the institute can be divided into four different categories, according to the below illustration. 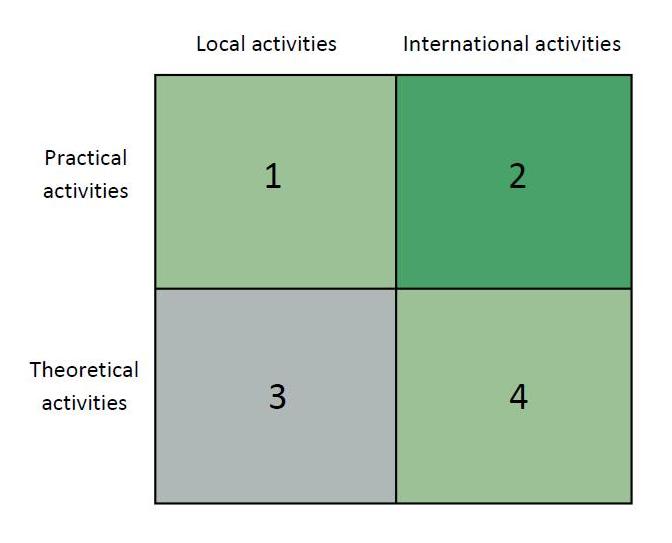 These four areas of concentration and target groups are not isolated from each other. The objective is that the activities and projects of the institute will cut across the four categories where possible. The peace institute has in recent years actively worked to strengthen the theoretical and scientific foundations and the analysis of the practical work, and concurrently to scientifically analyze questions of security, self-governance and minorities with the help of case studies and through more in-depth contacts with practitioners.

The different areas of activity that the Åland Islands Peace Institute engages in create a unity with peace as the goal. The overall purpose of the research is to work for a strengthening of knowledge that contributes to the peaceful development of society. The research activities are supported and complemented through the other activities of the institute, in particular the education, seminar and information activities.

The three subject areas of the research

The peace institute’s original idea of working within the overlapping field between security, forms of self-governance and minority protection continues to be scientifically relevant and important. The following graphic presentation reproduces these three overlapping subject areas. 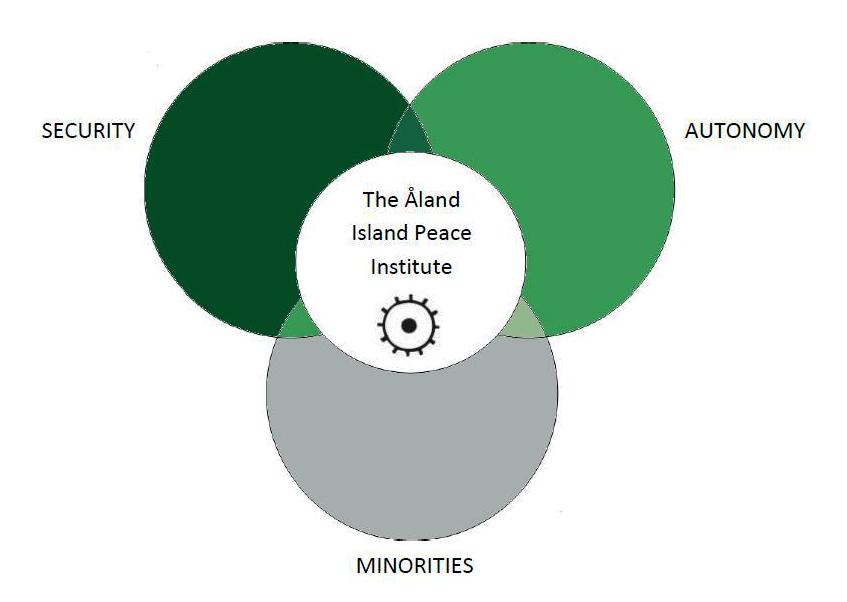 Security. The focus of the Åland Islands Peace Institute on security addresses questions of military security as well as human and social security. The demilitarisation and neutralisation of the Åland Islands still demand analysis and monitoring in light of new security contexts and in light of the European, Nordic and multilateral security cooperation. Demilitarisation originated already in 1856, but neutralisation, in other words the prohibition on acts of war within or against the territory of Åland during times of war came later, and has been analyzed and discussed to a lesser extent. The effect of the battle against terrorism on current concepts and understandings of security is clear and is re-creating the already doubtful distinction between “peace” and “war”. Ethnic conflicts, which are often internal, exist on both the European continent in a wider sense and in the rest of the world. The link between questions of identity, including religion, and conflict is likely to remain and be reinforced in the future.

Autonomy. Territorial and non-territorial autonomy arrangements continue to be developed within the framework of the constant tension between centre and periphery. In the Nordic region we have on the one hand the autonomous islands, in other words Åland, Greenland and the Faroe Islands, and on the other a certain degree of autonomy for the Sami people in matters that concern them and their traditional territories. In the rest of Europe decentralisation, regionalisation and questions of autonomy continue to be discussed and developed in many countries, at the same time as we are witnessing tendencies towards increasing nationalism. In many of these arrangements political self-governance is combined with different forms of support and legal protection for languages and identities. Self-governance is viewed as a network of institutions, but also as a process with dynamism, direction, and cooperating actors. The subsidiarity principle of the European Union can be expected to be developed further as a result of the entering into force of the Lisbon treaty, in combination with the continued discussion of a “citizens’ Europe”. The role of regions in European and Nordic cooperation therefore deserves further analysis.

Minorities The question of the participation of cultural minorities in the democratic decision-making processes has been one of the most pressing issues after the Second World War and in particular following the 70s’ and 80s’ identity movements across the world. For the Nordic region the question is how to combine an egalitarian welfare society with recognition of cultural identity and support for languages and cultures. How tolerant can we be towards those who advocate different ways of life from our own? How can we enable widespread political participation of minority groups? How should we respond to those who may even threaten the very foundations of democracy? Questions of how identities are created and of their constituent elements, of legislation and constitutional practice, as well as questions concerning the relationship between international and national developments are areas where the Åland Islands Peace Institute has lengthy experience, not least thanks to the potential of the Åland example as an object of analysis.

The results of the research

The peace institute has since the very beginning promoted research of self-governance on Åland, comparative studies of self-governance, demilitarisation and neutralisation on Åland and in Europe, as well as minority protection nationally and internationally. The peace institute was from an early stage also active in raising the question of the position and rights of minority women. Throughout the years innumerable seminars, conferences – both national and international – and publications in Swedish, English and Finnish have been the result of this strengthening of knowledge. Amongst others can be mentioned the recurrent “Minority Days” of the 1990s and the participation in several seminars on the ‘Åland example’  in cooperation with, for instance, the Åland parliament, the Åland government and the Ministry for Foreign Affairs of Finland.

Of the publications the following books should be mentioned in particular: ‘The Right of Domicile on Åland’ (2007, in English 2009); ‘Islands of Peace’ (2006, also available in Finnish and English); ‘International Obligations and National Debates: Minorities around the Baltic Sea’ (Sia Spiliopoulou Åkermark, ed., 2006); ‘Territorial Autonomies in the World’ (Maria Ackrén, 2005); ‘Demilitarised and Neutralised Territories in Europe’ (Christer Ahlström, 2004); ‘Åland, Finland and European Security’ (Teija Tiilikainen, 2002); ‘Human Rights of Minority Women – A Manual of International Law’ (Sia Spiliopoulou Åkermark, 2000).

The continuity in research has been assured through recurring themes in the investigations and publications of the peace institute: the constituent elements and potential of the Åland model; demilitarisation as a legal regime and as a trust-building measure; the security cooperation in Europe; the rights and the participation of minorities; and comparative study of autonomous regions. The research programmes of recent years reflect their time through their emphasis on the importance of all of these questions in a wider discussion of democratic participation and democratic institutions.

The direction of the research programme in coming years

The research will in coming years focus on the following three areas of specialization:

–       The content and relevance of the Åland example. The project will analyze the dynamic nature of the Åland regime and the development of contacts between Åland, Helsinki and the rest of the world in order to continue to manage the tensions that inevitably arise within a regime of self-governance with separate areas of authority and under the pressure from globalisation. Through case studies the project will follow up on the question of how the Åland example has been applied in international conflict management.

–       European multilingualism (European Language Diversity for all, 2010-201href=”http://www.peace.ax/), which studies the conditions for smaller Finno-Ugrian languages in eight countries of Europe. The research is carried out in cooperation with seven universities in Europe within the structure of the EU’s 7th framework programme for research.

–       Analysis of attitudes to gender equality, sexual violence and human trafficking and the effect of the so-called girl and boy group method on these understandings and attitudes. The research is carried out as a part of the project ‘Challenging Gender Roles for Prevention of Trafficking’ within the Central Baltic Interreg IVA-programme and is implemented during 2010-2011 in cooperation with the organisation ‘Resource Centre for Women, Marta’ in Latvia.

These primary areas of concentration are complemented through more short-term and limited projects within the peace institute’s subject areas, the report series, the seminars and the peace institute’s reception of guest researchers with special interests. The view on mediation in national as well as international conflict situations and according to prevailing legislation in several countries in Europe; the solution of conflicts in schools including through school mediation; the participation and influence of Åland within the EU; the language politics of self-governed regions; and the relationship between minority protection and the integration of immigrants are other areas where the peace institute already has expertise which can be developed and strengthened.

Openness to interdisciplinary meetings and work is already a hallmark of the work of the peace institute. The peace institute will also in the future prioritize interdisciplinary meetings, work and environments within its three subject areas. The peace institute will continue to try to attract both established researchers who will visit Åland and participate in specific projects and seminars, as well as younger researchers who will be given the possibility of spending a few weeks or months on Åland in order to research and write. The peace institute has several established contacts with research institutes and other organisations in the Nordic region and in Europe. These contacts will be strengthened and developed in coming years, for instance through different forms of exchange and joint activities. The forthcoming research project on multilateralism in Europe is an example of such a strengthening of ties.