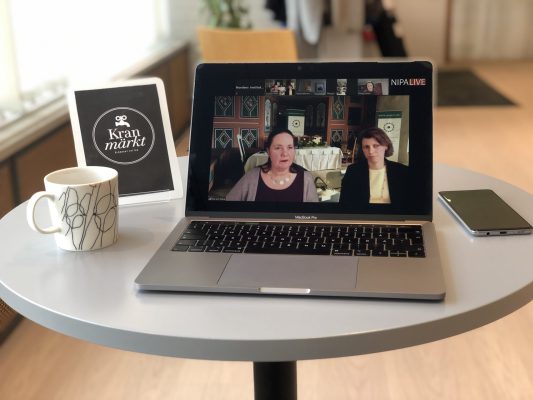 On Åland’s demilitarisation day, Monday 30 March 2020, the Åland Islands Peace Institute organized – for the sixth time – the Kastelholm Talks on Peace, with the theme War, Peace and the Environment.

Due to the coronavirus and the measures to stop its spread, this year’s Kastelholm Talks could not be held as usual in Kastelholm’s castle and at the restaurant Smakbyn. Instead, a digital version of the Kastelholm Talks was held in collaboration with Nordic Institute on Åland (Nipå), where the speakers participated through an internet connection and the audience could send their questions by e-mail. On the same day, almost 300 people watched the conversations either live or in retrospect.

The crisis gives us the opportunity to understand the gravity of the situation and adjust to change. If we do nothing about climate change, then in the future we will live in a state of emergency that is permanent, rather than temporary like what we have experienced now due to the corona crisis. This was one of the messages of the 2020 digital Kastelholm Talks where the patron of the talks, President Tarja Halonen, conversed with Margot Wallström, Marja Lehto, Pella Thiel, Mikael Sjövall and Emma Hakala.

In the first part of the Kastelholm Talks, President Tarja Halonen discussed this year’s theme with Margot Wallström, former Swedish Foreign Minister and EU Commissioner, and Marja Lehto, PhD in international law, Ambassador and Leading Expert at the Finnish Ministry for Foreign Affairs. The conversation was moderated by the Peace Institute’s director Sia Spiliopoulou Åkermark.

In the second part of the talks, commentators Pella Thiel, ecologist, systemic activist and cultural change agent, Mikael Sjövall, journalist and communicator and career diplomat at the Ministry for Foreign Affairs, and Emma Hakala, PhD in political history, began. Afterwards, research coordinator Petra Granholm moderated a conversation between all the speakers.

Ms. Margot Wallström, former Minister for Foreign Affairs of the Swedish Government (2014-2019) and EU Commissioner (responsible for Institutional Relations and Communication Strategy 2004-2010 and for Environment 1999-2004). During the 1990’s Ms Wallström was Minister of Social Affairs and Minister of Culture and later became the Special Representative of the United Nations Secretary-General on Sexual Violence in Conflict (2010-2012). During her time as Foreign Minister, the concept “feminist foreign policy” was launched and she was also involved in the development of the UN Treaty on the Prohibition of Nuclear Weapons. In 2008, she was awarded the Gothenburg Award for Sustainable Development for work on the environmental effect of chemicals. Ms Wallström is a honorary doctor at several universities in Sweden and the United States, and is Commander of the French Legion of Honor.

Ms. Pella Thiel, ecologist, systemic activist and cultural change agent. She coordinates the network for Rights of Nature in Sweden and is an expert in the UN’s Harmony with Nature program. She has also been involved in starting, among other things, the Adjustment Network, the network for Rights of Nature that she coordinates, Lodyn where she works with ecopsychology and rights of nature, and End Ecocide Sweden for international legislation against large-scale environmental degradation. Most interesting for Pella are paradigm-shifting ideas that affect how we perceive ourselves and the world.

Mr. Mikael Sjövall has studied political science, international law and general history at Åbo Akademi University. He has worked as a refugee assistant, reporter, career diplomat at the Ministry for Foreign Affairs, press secretary at Greenpeace Norden and communications manager at the environmental financing company Nefco. He has written an award-winning reportage book about the Estonian-Swedish minority and is the author of the play Svek i Aiboland. Sjövall returned to journalism in 2017 and now works as a reporter for the news agency SPT, which is owned by the Finnish-Swedish newspaper houses. He has led the Finnish Swedish Publicists’ Association since 2018.

Ms. Emma Hakala received her PhD in political history from the University of Helsinki in 2018. In her research, she examined the security of the environment and the role that international organisations played in this development, specifically for the post-conflict Western Balkans. Hakala’s research also concerns renewable energy, sustainable water management in Nepal and climate security. She is currently a senior visiting researcher at the Helsinki Institute of Foreign Policy, in the Global Security Research Program and a member of the BIOS research group.

”We are very pleased with this year’s innovative digital Kastelholm Talks. Instead of giving up and canceling, the staff of the Åland Islands Peace Institute has within two weeks set up a large digital apparatus thanks to a lot of goodwill and strong collaborations, e.g. with the Nordic Institute on Åland and the company Audiotrade. It required great effort. The theme ‘War, Peace and the Environment’ turned out to be just right for the time. The knowledge, commitment and versatility of the various speakers impressed me and I hope that many will want to listen to the recording afterwards. It is also interesting and exciting that so many conversations and events are now taking place digitally. Even if we cannot meet physically right now, it is important that the dialogue continues. The themes and conversations become no less important because they are held digitally instead of physically.”

The conference, which was held in Swedish, is available online here.


Listen to Marja Lehto speak (in English) on the Protection of the Environment in Armed Conflicts at the UN Audiovisual Library of International Law.

The Kastelholm Talks on Peace 2020 were carried out with support from: the Government of Åland, the Swedish Cultural Foundation in Finland, the Consulate General of Sweden in Mariehamn, the Ministry for Foreign Affairs and the Ministry of Justice Finland.