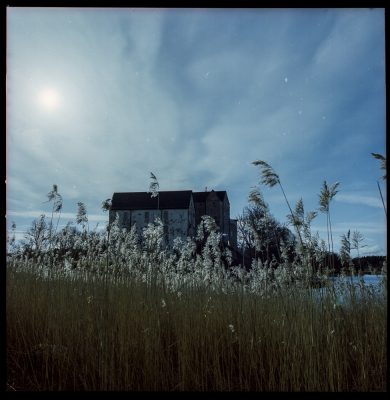 The demilitarisation of Åland in a nutshell

The status of the Åland Islands has been regulated through a long row of international agreements. Åland has been demilitarised since 1856 and neutralised since 1921.
Put shortly, demilitarisation means the following:

In addition to this, the Åland neutralisation means that Åland should be kept out of war. Åland may not, directly or indirectly, be used for any purpose connected with military operations.

If the Baltic Sea is directly affected by war, Finland may temporarily lay mines to protect Finland (including Åland) against attacks over Åland.
The security on Åland is assured, mainly by the Police (which is among the competences of Åland according to the Autonomy Act of Åland) and the Finnish Border Guard (which is the responsibility of the state) which in peacetime is a part of the police force but can be put under the authority of the Ministry of Defence during times of war.

The Åland demilitarisation and neutralisation covers a zone of three nautical miles from land and is usually depicted as a cloud around the islands. 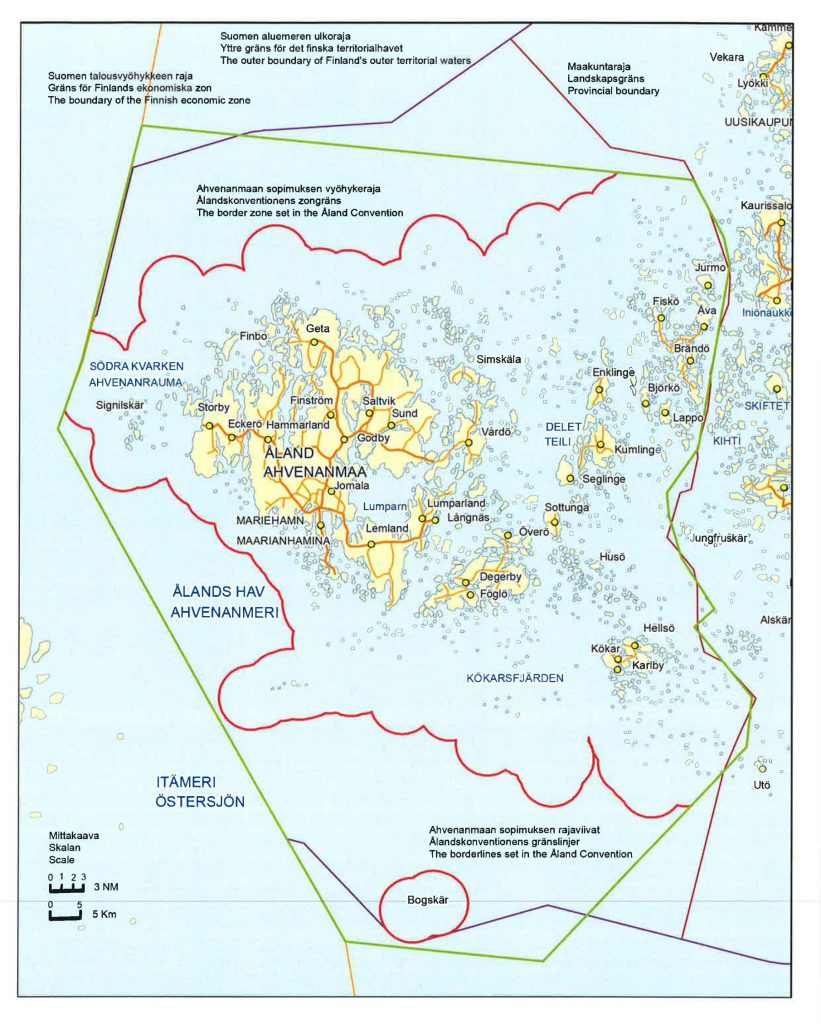 The neutralisation of a region is a legal status, i.e. different from neutrality, which is a security policy position or a constitutional rule from a state point of view.

According to the UN Charter all states have the right to self-defence. In the case of the Republic of Finland, the self-defence is especially regulated when it comes to Åland.

The status of Åland must be taken into consideration and respected in the policies and actions of Finland and other states. The different agreements have different foci and levels of detail. The Convention Relating to the Non-Fortification and Neutralisation of the Åland Islands of 1921 has the most detailed regulation and is also the one with the most convention parties.
In other words, the status of Åland shall primarily be treated by political and diplomatic means and not by military means.

Experts of public international law have stated that the long-term regulation and application of the agreements mean that the status of Åland has become binding also as customary law, i.e. it is in force for all international actors regardless if they are parties to the agreements or not.

The Åland solution as a whole

The demilitarisation and neutralisation of Åland is an important part of the international and constitutional status of Åland. The special status consists of three components that were connected to each other and to the League of Nations decision of Finnish sovereignty over the islands after the First World War:

The term “Åland Example” is commonly used when these three elements are used as an inspiration in international conflict resolution.
The Åland solution is simultaneously a geopolitical security solution, a confidence-promoting diplomatic system around the Baltic Sea and a negotiated special solution for a linguistic minority inhabiting a border region. 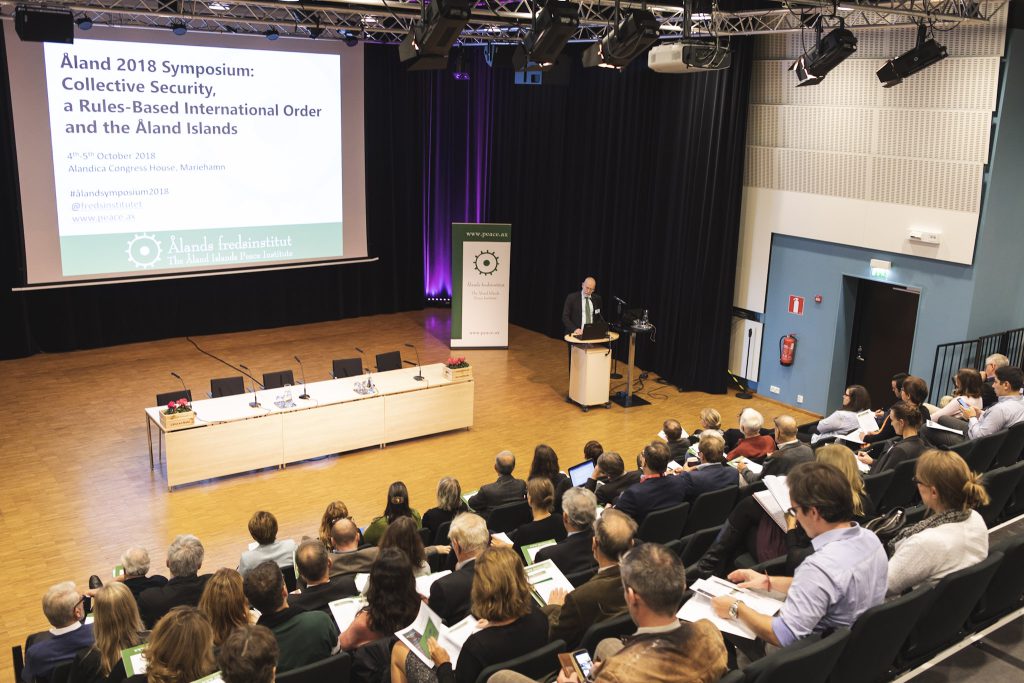 1856: Convention on the demilitarisation of the Åland Islands between France, the United Kingdom and Russia (the agreement was a part of the Paris Peace Treaty at the end of the Crimean War)
1921: Decision about the Åland Islands of the Council of the League of Nations – “The Åland decision”
1921: The Åland Agreement in the Council of the League of Nations
1921: Convention relating to the non-fortification and neutralisation of the Åland Islands
1940: Treaty between Finland and the Union of Socialist Soviet Republics concerning the Åland Islands
1947: Excerpts concerning Åland from the Paris Peace Treaty
These treaties, together with other basic international agreements such as the UN Charter (1945) and the Helsinki Act (1975), make up a network of rights and duties that impact all concerned states, including Finland and Åland.
Åland is not a party to the agreements, But in accordance with the Autonomy Act, shall be heard when decisions in important questions are to be made. 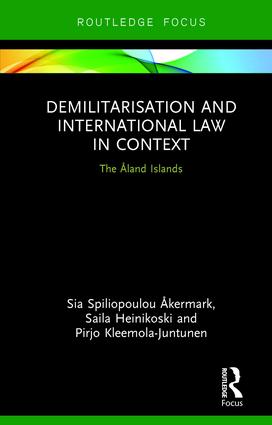 Further readings on the topic of demilitarisation and neutralisation

International documents regarding the Åland status

The Åland Foundation for Culture has gathered and published the international documents that make up the formal background of the Åland international status and autonomy, including the demilitarisation and neutralisation. The wording of the original documents has been collected through the archives of the United Nations and the League of Nations and the British Public Records Office. In 1993, a booklet was published, with facsimile prints of the originals and newly controlled translations to Swedish of all documents and to English of the documents in other languages than English or French. In 2018 also the documents concerning Åland in connection to the EU-association 1994 and the Lisbon Treaty of 2009 were added to the collection. The English version of this collection can be found here.

The project “Demilitarisation in an increasingly militarised world. International perspectives from a multilevel regulatory framework – the case of the Åland Islands” was conducted in 2015-2018 at the Åland Islands Peace Institute. It was led by Dr Sia Spiliopoulou Åkermark and supported by the Kone foundation, Helsinki.

Cooperation partners in the project were the University of Lapland and its Arctic Centre in Rovaniemi, Finland. Researchers involved in the project were: JD Pirjo Kleemola-Juntunen; research professor and director of the Arctic Centre in Rovaniemi Timo Koivurova; doctoral candidate and junior researcher Saila Heinikoski; as well as research assistants Yannick Poullie and Filip Holienčin.

At the end of the project an international symposium was held on October 2018 in Mariehamn and the book “Demilitarisation and International Law in Context – The Åland Islands” was published by Routledge publishers. The book is available for purchase here.

Sia Spiliopoulou Åkermark´ s summary of the project can be found in What is the essence of the institution of demilitarisation? Reflections upon Completion of the Research Project.

In addition to the book, the following articles were published within the project (in chronological order):

Yannick Poullie, “Åland’s demilitarisation and neutralisation at the end of the Cold War: Parliamentary discussions in Åland and Finland 1988–1995”, International Journal on Minority and Group Rights, Vol. 23: 2 (2016) 179–210.

Saila Heinikoski, “Pool It or Lose It? A contrastive analysis of discourses concerning EU military integration and demilitarization in the Baltic Sea”, Journal on Baltic Security, 3:1 (2017) 32–47. Available Open Access.

Timo Koivurova and Filip Holiencin, “Demilitarisation and neutralisation of Svalbard: how has the Svalbard regime been able to meet the changing security realities during almost 100 years of existence?” Polar Record, Vol. 53:2 (2017) 131–142.

Sia Spiliopoulou Åkermark, “The puzzle of collective self-defence: dangerous fragmentation or a window of opportunity? An analysis with Finland and the Åland Islands as a case study”, J Conflict Security Law Vol. 22:2 (2017) 249–274.

Pirjo Kleemola-Juntunen, “The Right of Innocent Passage: The Challenge of the Proliferation Security Initiative and the Implications for the Territorial Waters of the Åland Islands” in The Future of the Law of the Sea: Bridging Gaps between National, Individual and Common Interests, ed. Gemma Andreone, Springer publisher (2017), 239–269. Available Open Access.

Sia Spiliopoulou Åkermark, Tatu Hyttinen and Pirjo Kleemola-Juntunen, “Life on the Border: Dealing with Territorial Violations of the Demilitarised and Neutralised Zone of the Åland Islands”, Nordic Journal of International Law, 88:2 (2019) 135-179.

Selected academic articles on the topic

Holger Rotkirch, “The Demilitarization and Neutralization of the Åland Islands: A Regime ‘in European Interests’ Withstanding Changing Circumstances”, Journal of Peace Research 4 (1986), 357-376.

Åsa Gustafsson, “Aspects Regarding the Svalbard Demilitarisation in Relation to Norway Joining the Atlantic Alliance in 1949, and Reflections on the Åland Islands’ Demilitarised and Neutralised status in the Event of a Finnish NATO accession”, Journal of Autonomy and Security Studies, 2:2 (2018), 10–53. Available open access.

Lauri Hannikainen and Frank Horn, Autonomy and Demilitarisation in International Law: The Åland Islands in a Changing Europe (1997) Kluwer Law International, the Hague.

Publications of the Åland Islands Peace Institute can be ordered here.

PrevPreviousLunch Seminar about Åland and EU
NextWhat does the war in Ukraine do to us? A conversation between people.Next