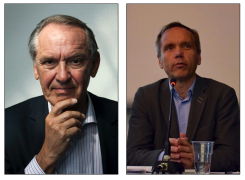 War, Peace and the Environment

President Tarja Halonen, patron of the Kastelholm Talks; Margot Wallström, former Minister for Foreign Affairs of the Swedish Government and EU Commissioner; Marja Lehto, Ambassador, Senior Adviser at the Ministry for Foreign Affairs of Finland, Adjunct Professor of international law at the University of Helsinki.

Democracy, Partication and the Role of Civil Society

Media, Power and Courage - Credibility and Trust in the Public Discourse

Finland as a Neighbor - Boundaries and Boundlessness Over the Past Century

Pekka Haavisto, Member of the Parliament of Finland and the Foreign Minister’s Special Representative for Peace Mediation; Lena Ek, chairperson of the Forestry Group Södra and former Minister for the environment in Sweden; Said Mahmoudi, Professor of International Law at Stockholm University; Hanna Ojanen, Jean Monnet Professor at the University of Tampere.

Erkki Tuomioja, the Foreign Minister of Finland; Britt Bohlin, the Director of the Nordic Council; Aud Lise Norheim, Director General at the Department for UN, Peace and Humanitarian Affairs at the Ministry for Foreign Affairs of Norway; Hans Wallmark, Swedish Member of Parliament and Vice-President of the Nordic Council.