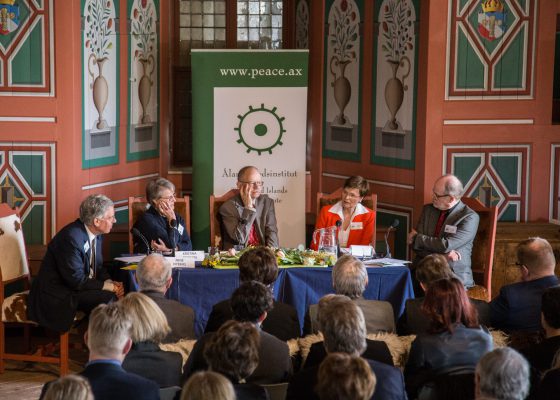 Kastelholm Talks 2017: Finland as a Neighbor – Boundaries and Boundlessness Over the Past Century

The Kastelholm talks of 2017 highlighted the centenary celebration of Finland, discussing the topic “With Finland as a neighbour – boundaries and boundlessness over the past century”. When Finland gained its independence in 1917, Sweden, Russia and other countries around the Baltic Sea and in the Nordic region got a new neighbour. A little later Åland became autonomous, and hereby became an” internal neighbour” for Finland, in a process that also engaged the surrounding world. In the conversation that moved between past and future, it was discussed how the neighbours views Finland’s development and how Finland views the neighbours. What have the last one hundred years entailed for the neighbourhood, and what can we expect from the next century, in view of the past? What relationships and identities will Finland, Åland and their neighbours around the Baltic sea develop in a neighbourhood of transformation of a world that is becoming increasingly boundless? The kastelholm talks 2017, which were the third in order held on March 30, the Ålands demilitarisation day.

The Kastelholm talks are held yearly on the Åland Islands under the patronage of former President of Finland, Tarja Halonen.

The event started with a panel discussion in the castle of Kastelholm with four invited speakers, including former Finnish Minister and High Commissioner Astrid Thors, former Swedish Minister Kristina Persson, former Ambassador René Nyberg and Norwegian peace researcher Professor Nils Petter Gleditsch. The debate was moderated by Professor Kjell-Åke Nordquist, Director of the Åland Islands Peace Institute. Nordquist initiated the discussion by asking the speakers what they would congratulate Finland for and what they think holds Finland together. An aspect that was particularly applauded was the high trust towards institutions, which was seen as one of the crucial aspects of success. The speakers also shared their assessments and experiences from the Cold War era, whereby Finland’s active role and the 1975 Helsinki Accords were underlined. The legacy of this meeting, the OSCE, was still considered utterly important in its role in solving conflicts and being one of the upholders of multilateralism in today’s Europe.

The current world and globalization also raised contradictory thoughts. Whereas Nils Petter Gleditsch noted that the number of conflicts has decreased and most of the current conflicts are intra-state, Astrid Thors reminded that the number of refugees is larger than ever before in history. Kristina Persson was worried about wealth inequality, where the richest eight people in the world own as much as half of the globe’s population. What she deemed positive in global politics, in turn, was that the Norwegian status as an observant at the next G20 meeting was positively upholding the role of the entire Nordic region. Nordic cooperation was appreciated also in other addresses: René Nyberg applauded for instance NORDEFCO for successful defense cooperation, especially regarding air force exercises in the North.

The debate also touched upon the role of Åland, which was similarly seen to involve both positive and challenging aspects. Kristina Persson pointed out that the smaller the society the more it is dependent on others, but as a counterbalance, smaller societies can better involve people. Astrid Thors considered that Ålanders today know Finland to a lesser extent than they did 30 years ago and urged them to get to know Finland better. René Nyberg, in contrast, was worried about the status of the Swedish language in Finland, with yet another Prime Minister who does not speak Swedish. Nils Petter Gleditsch hoped that Åland could serve as a model for territorial disputes in the world, with its autonomy, minority rights and demilitarisation. As a conclusion to the debate, the speakers hoped that Nordic cooperation increases and openn 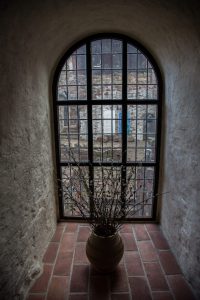 ess towards the world is further strengthened.

After a coffee break, the discussion continued with a roundtable discussion at the nearby restaurant Smakbyn. In addition to the panel from the castle, three speakers were asked to share their thoughts about the theme of “neighbourness” under the moderation of Sia Spiliopoulou Åkermark, Research Director of the Åland Islands Peace Institute. The theme was discussed from a variety of perspectives, and the audience could also intervene. In her opening address, Anna Abrahamsson, the Secretary General of Svensk Ungdom (Youth Organisation of the Swedish People’s Party in Finland), expressed her concern about young people not upholding democratic values, as revealed in a recent study. Janne Holmén, an Ålandic historian, argued based on recent research that people in Finland’s closest neighbour, Sweden, do not know Finland well, as revealed in recent studies. Similarly, to Anna Abrahamsson, he also connected the theme to democracy, considering Finland putting more emphasis on the rule of law and Sweden on democracy. The third speaker, Natalia Jerofejeva, a language pedagogue in Åland with a Russian background, pointed out the borderlessness we can observe in our neighbourhood, also building upon her own personal experience.

After the opening addresses, the audience eagerly joined in the discussion, with both academic and political viewpoints. René Nyberg pointed out that legalism can also be a political strategy, whereas Astrid Thors and Kristina Persson were worried about the fear of the “other” being used as a political weapon instead of building a sense of togetherness. The discussion also varied from the lack of interest in politics among young people to the role of Russia in the world. Barbro Sundback, the Chair of the Board of Directors of the Peace Institute, brought up the role of the sea as a neighbour. For Ålanders, the sea seems to bring security, an observation she contrasted to Sicily. Indeed, for Sicilians the sea represented a threat through which the region had been invaded throughout history.

The role of Norden and Finland in the EU also came up in the debate. There was discussion whether Nordic priorities should be better upheld in the EU and whether Sweden, as a land of consensus, had had more difficulties in adapting into the European Union than the centralized Finland. Regarding the political sphere, concern raised by the audience decreased public interest in politics, whereby individualism and social media were partly to blame. The conclusion of the speakers was that knowledge is the key for successful neighbourness, which also involves not separating between “us” and “them”.

Anna Abrahamsson is the Secretary General of Svensk Ungdom, (youth organization of the Swedish people’s party in Finland. She is a Master’s student in Public International Law at the Åbo Akademi University and is a member of Sibbo’s municipal council and board. Anna has previously worked as a substitute member of European Parliament Nils Torvalds’ staff and as assistant for member of parliament Anders Adlercreutz.

Janne Holmen is PHD in History, working as a researcher at the historical department of Uppsala university and at the Åbo Akademi University. His main research interests are historiography, textbook research, educational history, identity research, Island research and mental maps. Most of his research has consisted of comparative studies of Nordic and Baltic sea areas.

Natalia Jerofejeva was born in Holmgård, now Velikil Novgorod, in Russia. She has studied Literature and is a trained language teacher. Natalia has been living in Åland for 14 years and works as an educator at an elementary school in Mariehamn. She is active in a multicultural association in Åland, where she was previously a board member.

The Kastelholm talks 2017 were part of the program for Finland’s 100th anniversary.

Film. The opening part of the Kastelholm talks held at the Kastelholm castle was live streamed in collaboration with the Nordic Institute in Åland. The film can be seen retrospect, here. 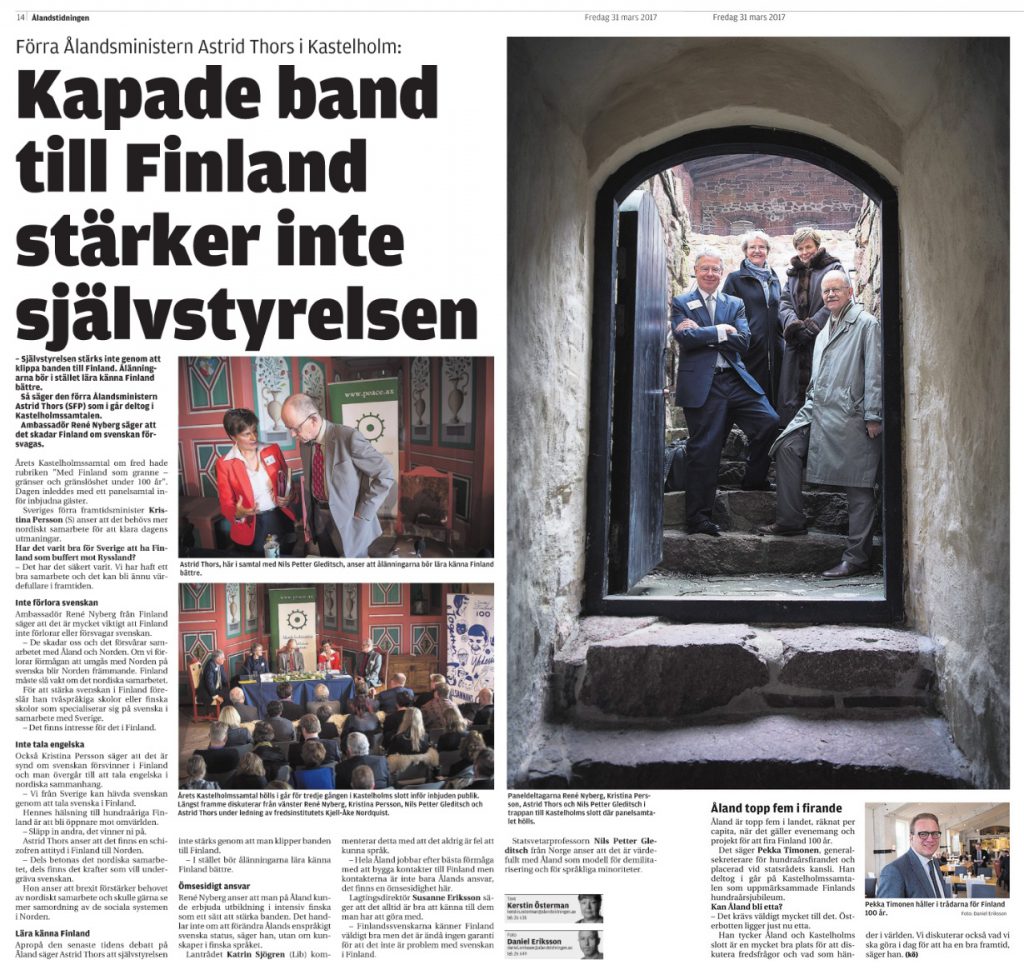