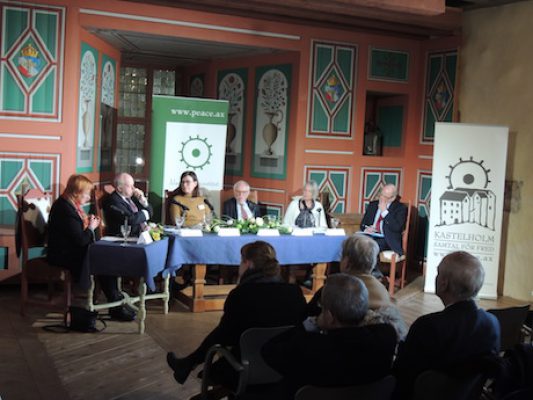 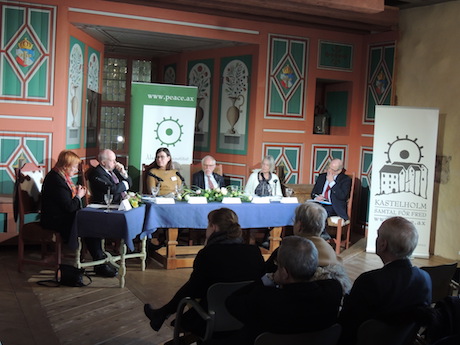 This year's Kastelholm talks were held on Thursday, 22.3.2018, with the topic "Media, power and courage – on credibility and trust in the public discourse". The Kastelholm talks began with a panel discussion in Kastelholm Castle, where the patron of the talks President Tarja Halonen discussed with a panel consisting of Merete Mazzarella, writer, essayist, journalist and professor of literary studies; Olof Ehrenkrona, Ambassador and Consul General of Sweden in the Åland Islands; Anders Mellbourn, Political Scientist, Journalist, former Editor-in-Chief of newspaper Dagens Nyheter, previous Director of The Swedish Institute of International Affairs and University Professor, and Britt Lundberg, Ålandic politician, President of the Nordic Council in 2017, former Speaker of the Åland Parliament, former minister and Deputy Head of the Åland government. The conversation was moderated by Professor Kjell-Åke Nordquist.

The Kastelholms talks were filmed: The conversation was livestreamed in collaboration with Nipå and can be watched (in Swedish) here.

After a coffee break, the discussion continued with a round-table discussion at the nearby restaurant Smakbyn. The discussion was launched by three new speakers, Martha Hannus, Chairperson of Association Regnbågsfyren and Sustainability Officer at Emmaus Åland; Barbro Sundback, former Speaker of the Parliament of Åland and former Chairperson of the Board of the Peace Institute, now Honorary Chairperson, and Janne Wass, Editor-in-Chief of the magazine Ny Tid. The Director of the Peace Institute, Associate Professor Sia Spiliopoulou Åkermark moderated the discussion. The audience also participated, and the theme was therefore illuminated from many different perspectives.

On the Swedish version ot the web page, texts in Swedish, documenting the talks, as well as links to media coverage from the talks, can be found clicking here.