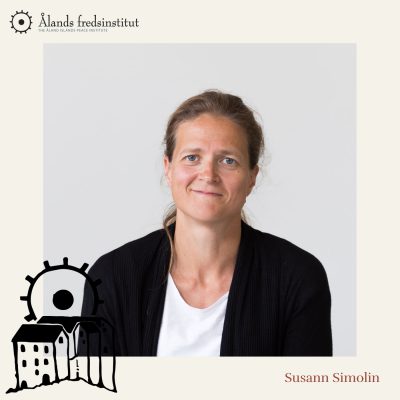 Susann Simolin has worked at the Aland Islands Peace Institute for many years as Information Officer and is currently on leave for her doctoral dissertation in Political Science at Åbo Akademi University. In this podcast episode Simolin discusses with Kjell-Åke Nordqvist about the Åland Example and how it may be used in conflicts and the settlement of them.

The discussion begins with the topic of what efforts for peace that Simolin finds the most urgent in todays world. The truth is an important aspect in any conflict, and Simolin brings up that it is often the truth that is the first victim in any war. Truth can be seen from several different angles and it is therefore sometimes complicated to solve a conflict, if the parts of the conflict have different views of what is true in the case. Simolin points out that it is important to keep an open dialogue and discuss amongst the participants in the conflict what they consider to be true and to be able to see each other’s views of the situation. Simolin also emphasizes the mediator’s role and that it is important for he or she to know all aspects and all the layers of the case, not just for example the historical background, to fully understand the situation and perhaps also be able to solve it. There is of course a problem with the fact that if the parts do not agree on the historical background of the problem, then it will be hard to find a common solution that will work for the future. Simolin mentions that if two parts in a conflict are able to co-exist, then a solution of the autonomy-kind could sometimes be possible, depending on the situation.

Nordqvist and Simolin also discusses the different reasons for conflicts, but whether these are religion, identities, economy or geo-politics, they are in most cases intertwined and overlaps each other. There is almost always more than one reason for the conflict, and many of those are perhaps not obvious ones at first sight.

The discussion was then led into the subject of Simolin’s doctoral dissertation that she is currently working on. The Åland Example is working as a form of inspiration and base for the dissertation. Although it is not the case of the Åland Islands that she wants to focus on, but rather how the Åland Example can play a role in solving conflicts in other states. The Åland Example is found interesting by many other states and some aspects of it are often brought up, such as the international guarantees and the relationship between Finland and Sweden during the process.

Nordqvist and Simolin also talks about the different types of mediation and mediators. There are many different actors and mediators on several levels and this is mostly a positive thing according to Simolin, even though she considers that it would be even better if these could cooperate more. As mentioned, there are two types of mediators, the one that comes from far away and is neutral to the situation, and the one that is from the area in question and has trust from the local people but do not have the same resources as the earlier mentioned. Both Nordqvist and Simolin concur that a combination of the prestige from the mediator on the higher level and the knowledge of the one on the local level would be to advantage for the solving of the conflict. Simolin also points out that even when a conflict is solved, it is almost impossible to know what the best solution would have been, since one does not know what the result would have been if one would have chosen another way of solving the conflict.

The conversation is concluded with discussions on how the Åland Example could be improved (where economic autonomy is discussed), and also how the Åland Islands could be inspired by other states in the world.